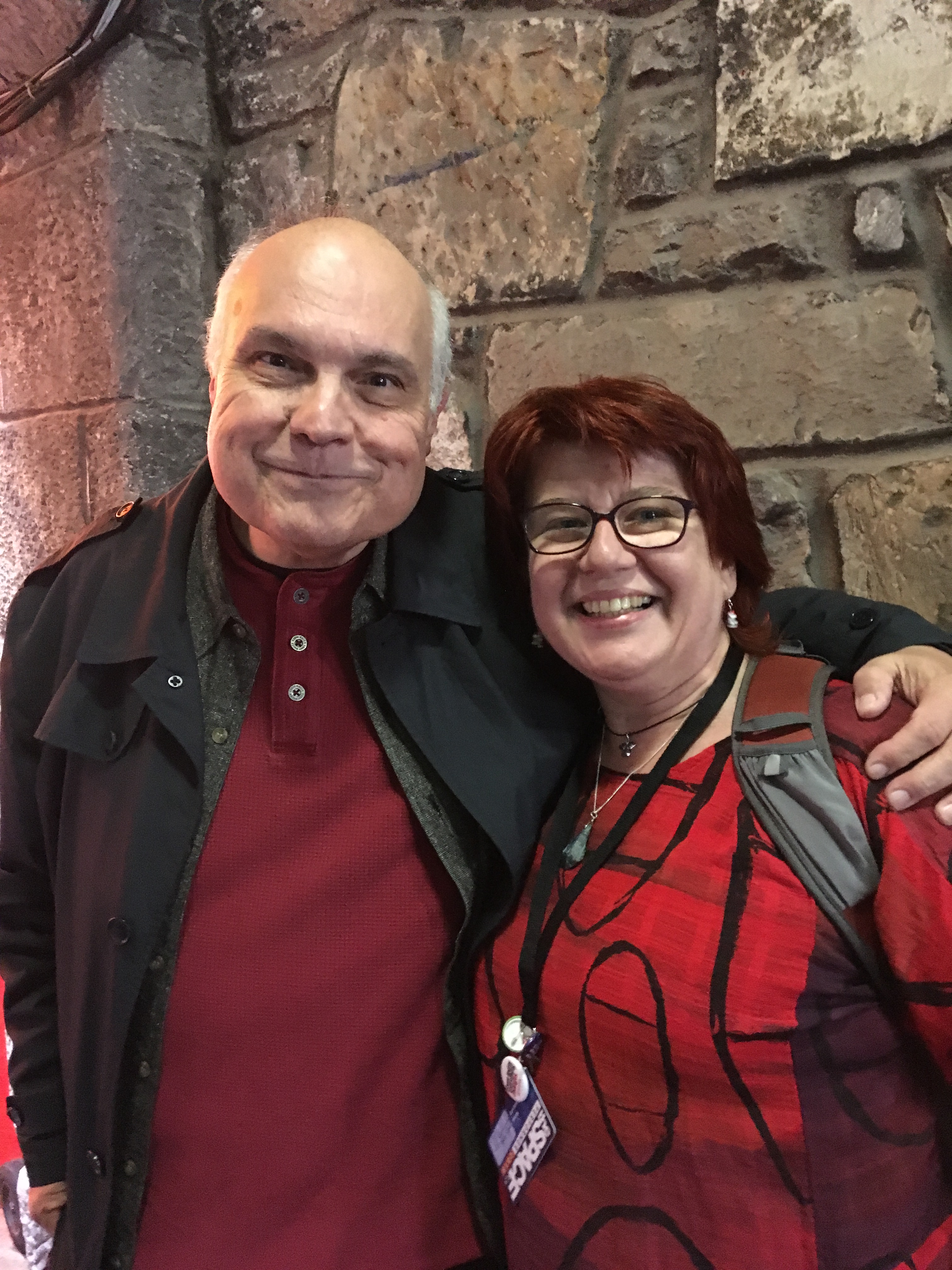 Today I met one of my acting heroes. I’m very grateful to Helen for stopping me motoring through and asking if I wanted a photo – because I hadn’t noticed at all, on a mission, places to go. “Photo?” Yes, yes, Mike McShane, standing talking to some friends. MIKE McSHANE. I’ve been a fan since “Who’s Line is it Anyway?” and then the double act show he did following that, and of course, of course, one of my favourite films of all time: “Robin Hood, Prince of Thieves”. I bloody loved him in that, recognised him instantly, am pleased I kept my cool at least a little and didn’t fan quote all the lines in that movie to him. But I did get my pic with him. And what a totally lovely guy, talked with us for quite some time. And I managed not to gush. I think. I did cry though. After I was out of his sight line! 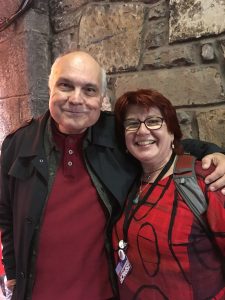 Context – Helen and I watched the play “Brexit” written by Robert Khan and Tom Salinsky starring Mike McShane and other acting legends – which was seriously the best observed political play I’ve ever seen. It wasn’t even an allegory, it was written for now, with acutely witnessed political machinations and the madness of Brexit politics – as well as politics in general, which in this was all about staying in power and winning approval, rather than choosing the right policy. It was incredibly funny, although so true in hindsight it’s likely to cause as many tears of futility and sadness as well as joy. One of the best things I’ve seen on stage. I don’t just mean in this Fringe, I mean ever. Not just because Mike McShane was in it. A little bit. But not the main reason.

When we came out there were a pile of people exit flyering – thrusting different flyers into hands, when I heard someone saying something about being interested in God. This made me look up and there in Tudor dress was one of my acting teachers – Jules, fabulous voice teacher! I had not expected to see anyone I knew and all 3 of us ended up chatting for a while. Helen and I are going to see the play she is in tomorrow.

Just the five shows today. Again. I’m clearly a five-shows-a-day kinda gal. I’ve been a dirty stop out since 10 this morning. I saw Alan Bennett’s “Say Something Happened” which is a joy to watch, and so layered that it stays with you and comes back at you in layers when you’re thinking about something else. An amateur production but still really enjoyable. After that I found a cafe called “Spoon” which was almost a little piece of Brighton in the heart of Edinburgh. It seriously felt like Brighton. Artisan toast. Portobello mushroom and goats cheese with sourdough toast and pea shoots. You can’t really get more Brighton than that! And real tea – I mean REAL tea, with a tea strainer. Mismatching teapot with the cup and saucer. Ahhhhh I felt a little homesick. 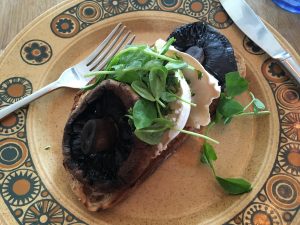 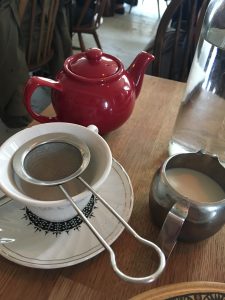 After Brexit I ran up almost to the Castle to see the next show for me to review: James Dean is Dead, Long Live James Dean. Wow what a show. What a performance. He also looked so like James Franco I did a serious double take. Wowsers.

This was right at the top of the Royal Mile – where most of the insanity seems to be concentrated, perhaps. And I saw the strangest sight. In this city, that’s saying something.

This guy was hovering off the ground. I walked around and around him and he was floating. I could NOT see how he was doing this. Honestly I have no clue. I thought maybe it was him holding on to his stationery counterpart but no, his arm was resting. The rest of him was not touching anything. Seriously, I walked all around him. Then I shook my head, took a picture, and walked on. BONKERS. 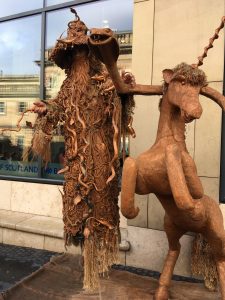 As I came out of the James Dean show I heard singing, and it was the way I was going, so I looked – and these guys stopped traffic. Singing Mamma Mia. About 50 of them. Tons of onlookers. Again, seriously, they stopped traffic. Cars were beeping to get past. Walking on, 30 seconds later and of course there were people from Star Wars. I mean, what else? 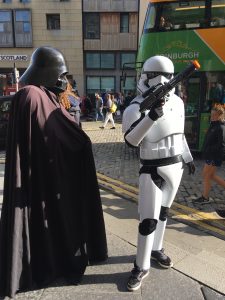 This was about tea time so I searched for somewhere which satisfied my criteria: 1. quirky 2. not too expensive 3. nice food 4. most important: wifi. As I had reviews to submit with a deadline approaching.

I found a cafe off the mile: St Giles, which was high ceilinged and bare floored with cafe tables and quite disinterested staff. Quirky not too expensive food, including a cream cheese, walnut and honey bagel which was just delicious and I will have to remember to make at home! So there I sat, freaking out the customers either side of me – simply by being a woman on her own in a reasonably visible eating establishment with a laptop in front of her, content with her own company. (Yes. Sometimes this freaks people out. No really, it does.) When I spoke to Andy via facetime at home and talked with Mia who looked so happy and tired and it made my day, but I made the mistake of swearing (it just tumbled out) about how good the James Dean play was the Americans on the table to my left visibly bristled and huffed and puffed their disapproval for the remainder of their time there. Honestly, I’m clearly too much, I need to get back into my box and realise what’s important in the world, which is that women shouldn’t swear, and if they do it’s a heinous crime, punishable by social ostracisation and disapproval; and that the things that I believe are important and require disapproval and above all action, such as child poverty, starvation and homelessness – these are of course not important at all, that it’s all about the odd slip of the F word in a passionate statement said in a public place due to that requires me to be publicly flogged.

So I stayed there writing for quite some time and gradually realised that I felt like I had been transported to France. It was the most French place I’ve seen outside of France. I can’t believe I didn’t notice when I first went in. If it hadn’t been for the specials blackboard announcing the “whisky of the day” I would have really believed I was in France. With Edith Piaf singing out “Non, rien de rien…” (I am not making this up) if you’d told me I was actually in France I would have believed you.

Then onto Antling. Ah Helen’s wonderful creation still makes me laugh and I can’t count the number of times I’ve seen it. Had a big Adam Ant fan in this evening, who said his wife was an even bigger Adam Ant fan – I offered him to live stream it to her on his phone but I think he thought I was joking. Helen was particularly awesome this evening.

We then went to Bristo Square which I’d not seen after sun down and the lights made it look even prettier. While we sat and had a chat and wind down, we were flyered – by a New Zealand comedienne with her show “Ladylike”, starting shortly, so we went to see it. Just what we needed. Not highbrow, just funny. Watching her make “chicken liver pate” with cocktail sausages in order to impress the neighbours but keep costs down was really quite hilarious. She did manage to hit a few nails on heads about the impossible standards of having to be a woman.

And hey, I met Mike McShane.

Just in case you missed that bit. 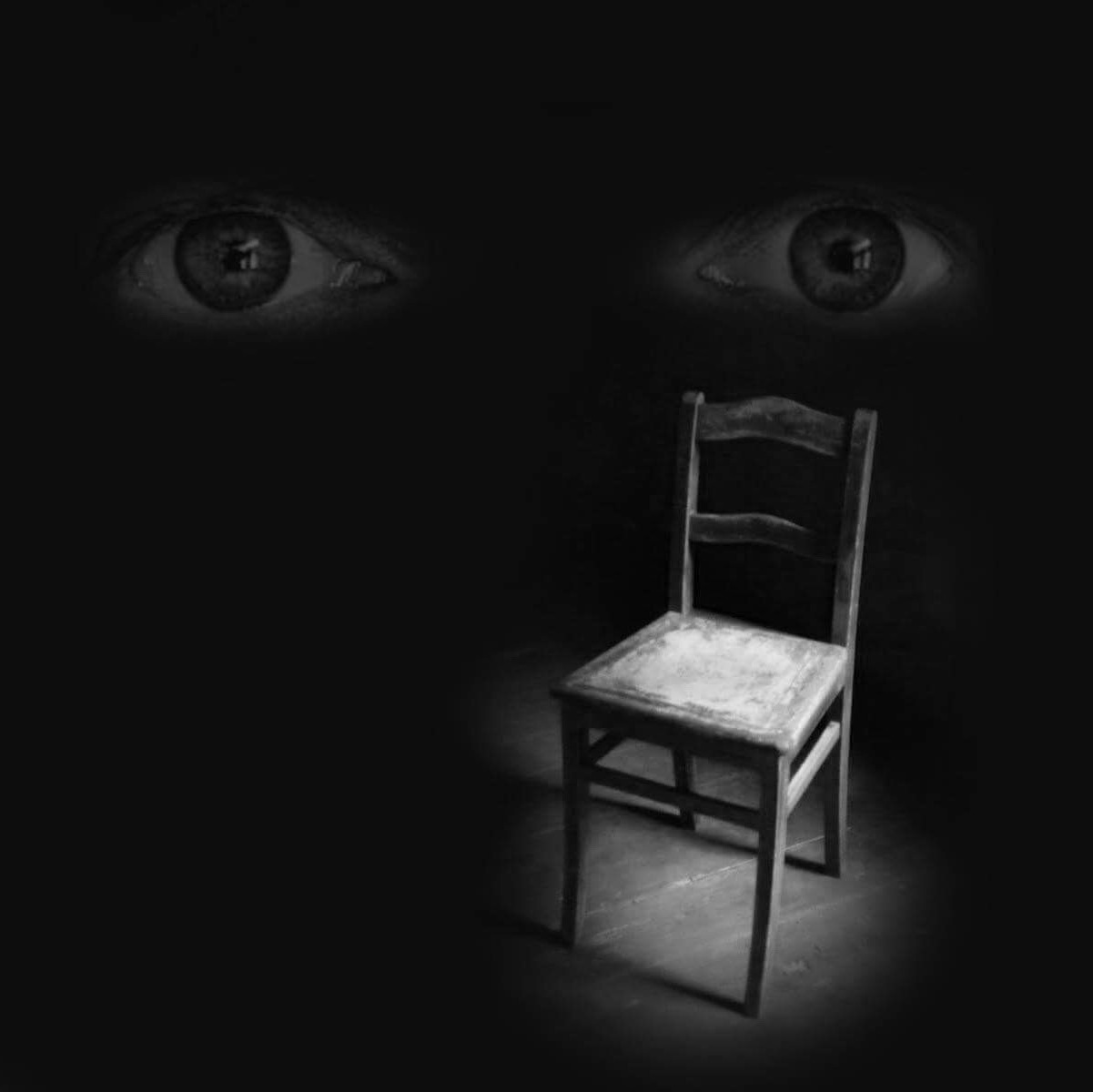 What a couple of weeks!

We are mid way through the run for my play “The Session” with Twilight Theatre. Audiences have loved it and given brilliant feedback. 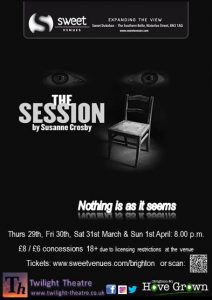 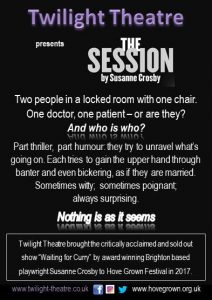 “fantastic… so much so that I’m going again tonight”

“What an amazing, fantastic performance! A brilliantly written script and a very very talented cast. The venue really lends itself to this play and you are completely drawn in to everything happening on the stage. This is an absolute Must-See for everyone, I guarantee you will be glad you did.”

“I watched this little gem last night. It gets the old grey matter thinking. One not to miss. Written by the amazing Suse Crosby”

James Roy, from Meridian FM: “Wow. Cleverly written, brilliantly performed. “The Session” at the lovely intimate Sweet Dukebox Theatre. Get fully immersed in the action whilst trying to work out who is the Doctor and who is the Patient!”

Still some tickets left – do come along!

And just before “The Session” opened, “Antling” written and performed by the amazing Helen Pepper Smith and directed by yours truly premiered, also as part of Hove Grown Festival. 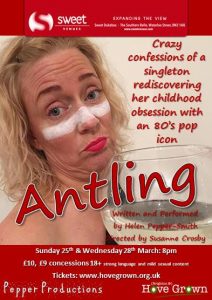 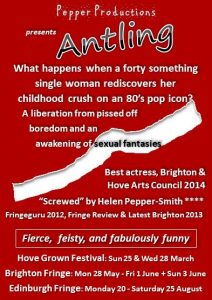 Don’t worry if you missed it – this fabulous show will be back in the Brighton Fringe Festival, and in the Edinburgh Fringe too!

And if that wasn’t enough – next week I’ll be performing in the Wick Theatre‘s production of “Disappeared”. This has a fabulous cast and a great crew, led by director Guy Steddon.

The character I play has been challenging, because she’s really not very nice at all. When I saw myself in the publicity photos I was astonished I could look so – well – vile! Still some tickets left, runs 4 – 7 April. 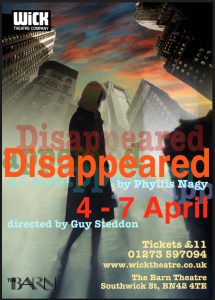 written and directed by Susanne Crosby

Two people in a locked room with one chair.

One doctor, one patient – or are they? And who is who?

Part thriller, part humour: they try to unravel what’s going on. Each tries to gain the upper hand through banter and even bickering, as if they are married.

Looking for solid character actors, one man one woman, to play the two leads characters Emma and Tom. Some physicality required in performance.

Looking for pragmatic and flexible actors to be part of creating these roles in an intimate theatre space.

This is a great opportunity to be part of creating unique theatre.

The play is one act and is 50 minutes long.

Details of the Audition:

You may also be asked to read a section of the script with others. You are not required to be off book for this. This will be given at the audition, however, if you would prefer to read it in advance of the audition please contact below.

Rehearsals: will begin the following week, to be agreed with cast, some flexibility will be required.

If you have read all of the above and have any queries, please contact: enquiries@twilight-theatre.co.uk

Otherwise, we look forward to seeing you at the audition!