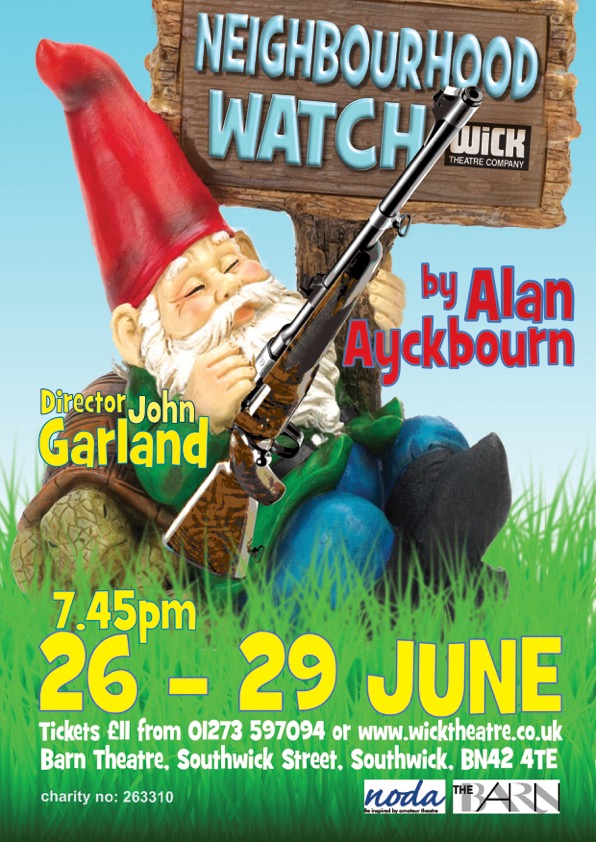 Hubby Andy wished me good luck being a “God bothering nut job” for my role in Alan Ayckbourn’s “Neighbourhood Watch”, produced by Wick Theatre at the Barn last week. That made me smile. A lot.

It really was great fun rehearsing for this quite bonkers play and John Garland was a fabulous director. Of course that doesn’t mean it was plain sailing, it never is, there are always tense moments towards the end of the rehearsal process but there were some evenings where I was literally crying with laughter. There was even one evening where I had to stop myself laughing on stage. There were pieces in this which were hilarious from the word go and still funny three months later.

I think my character: Hilda Massie, is possibly the most far removed from my own personality that I’ve ever played. It was hugely educational getting under the skin of a type of person I have never understood – those that don’t value honesty, but think it’s rude. They have such a skewed view of the world and themselves that they are seriously deluded, but would vehemently deny this to the end. I’ve previously found this incomprehensible but I had an “aha!” moment during my character preparations and research that really helped me understand. Fascinating. And very sad. There was seriously only one thing we have in common – we both value arnica. And yes, it comes up more than once in the play!

So in short – farewell Hilda, you bonkers manipulative right wing evangelical nut job, I’m re-embracing myself. Acting tab is updated with our brilliant reviews from NODA, Brighton Argus and Shoreham Herald; plus show photos. It’s always so important to receive feedback and so lovely when it’s positive!

To end this year’s Fringe I saw four shows in three days. Yes, three of them were children’s shows and one of those I didn’t even bring Mia to as she was double booked – but I had committed to reviewing it.

We started with a retelling of “Beauty and the Beast” on Friday which was delightful and charming. I wanted to give this 3.5 stars but the star rating won’t give halves. It was really lovely though and Mia loved the beast and having her photo taken with them! Review here.

Friday evening I was at Brighton Little for “The Pride”. I wouldn’t and couldn’t review this being a member of the Little. OH MY GIDDY GOODNESS I can’t even begin to tell you how absolutely brilliant it was. Superb script, beautifully and sensitively directed with perfect understanding of the material, and the acting was incredible. Sometimes BLT produce absolute class, and this was one of these moments. This is NOT a forgettable play, or a forgettable evening. This will stay with me. Wow. If I could have reviewed it I would have given 5 stars.

Saturday, this time without Mia, I saw “Ogg and Ugg and Dogg” about how early humans first connected with wolves and tamed them, thus creating one of our most beloved pets. Sounded great, and it started really well but after about 20 minutes just kind of fizzled out slowly through to the end. I really wished more for it as it had potential. I reviewed this and if you want to find it do search but I won’t put the link.

Sunday, the best at the last: my favourite has to be “This Noisy Isle” which was just brilliant. A fun non patronising children’s show which as a deeper message. More of these please! Mia absolutely loved it and so did Andy and I. Read my review here.

Shakespeare’s Twelfth Night is my favourite of his comedies so I lept at the chance to go and see it last night in the Minerva Theatre in Chichester (last minute spare and cheap ticket). This is my first experience of this particular theatre and what a beauty it is, absolutely lovely, intimate yet it looked like quite a huge amount of seating.

Flute Theatre had their cast of 7 portraying all the characters in this abridged version of the play, adapted by Kelly Hunter. It was a polished piece, despite one of them slipping over on water at one point, and the actors were drilled. It was a very physical piece too, all the actors had to display their fitness with the way the play had been directed and choreographed. They also played all the instruments and there was music accompanying the performance for almost the entire time. This gave a feel of almost street theatre which was sometimes appropriate and sometimes not.

I’ve studied this play and there are many themes in it but I don’t remember water being one of them. So what huge tubs of water dotted around the periphery of the playing area were doing there is beyond me. There was obviously a reason but it wasn’t drawn out in the playing, although a couple of them did use one of them. The actors did convey an understanding of most of the words that they were saying, meaning that even the most new to Shakespeare could probably follow it, however there were some meanings that were very important that were lost and it didn’t seem like the actors understood those particular lines. What was the most detrimental to my enjoyment was the actress playing Viola – the main role, had such a strong accent that when she spoke quickly I just couldn’t understand what she was saying and that took me out of being able to enjoy the production.

There were some sections just devoted to physical acting with no words where I wanted to shout “get on with it”. I’m not sure why music needed be played throughout the play either. Shakespeare has such beautiful and clever wording particularly in this play and the gaps meant some of this delicious language was left out, when it was abridged already it felt like these things were just devices for the sake of it.

The actor playing Malvolio acted his part beautifully, bringing in a masochistic side to the character which I hadn’t seen before but fitted perfectly. His attempts at smiling were both funny and sad. The actor playing Sir Andrew and Sebastian moved seamlessly in a few seconds between them and that was brilliantly done.

Some strong performances, some interesting ideas, some not so. I’ve never felt so sorry for Malvolio in any production as I did in this one. So some positive, some negative: not the best production of Twelfth Night I’ve seen, but not the worst.