Good grief where has the time gone?!?

Since last Summer I’ve been involved in all manner of Theatre shenanigans, including winning the Publicity Award from Brighton and Hove Arts Council for the publicity for “Taking Sides”, produced in October by Wick Theatre at the Barn Theatre, Southwick, nr Brighton – which I am seriously proud of.

In January, I directed the wonderfully eerie “The Exorcism” by Don Taylor, from TV’s Dead of Night, also at the Barn Theatre for the Wick. That was an amazing production and the reviews were astonishingly good. My cast were fantastic, the set was incredible, the special effects made the audience jump – and we had real Christmas dinner cooked fresh every night by one of the cast members!

Shoreham Herald Review – click here. There is also a review from NODA – the National Organisation for the Dramatic Arts, on the theatre page as a PDF file. 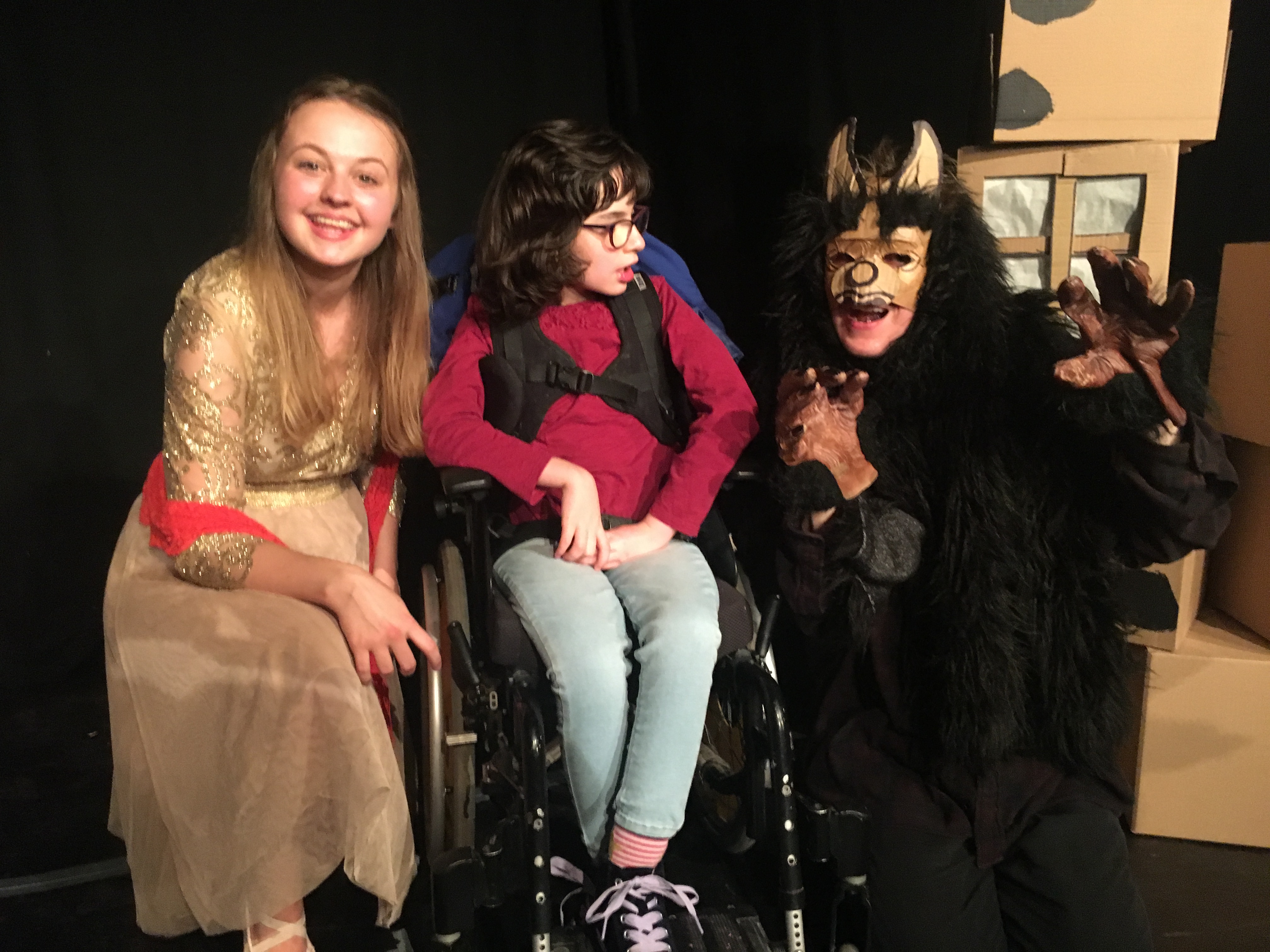 To end this year’s Fringe I saw four shows in three days. Yes, three of them were children’s shows and one of those I didn’t even bring Mia to as she was double booked – but I had committed to reviewing it.

We started with a retelling of “Beauty and the Beast” on Friday which was delightful and charming. I wanted to give this 3.5 stars but the star rating won’t give halves. It was really lovely though and Mia loved the beast and having her photo taken with them! Review here.

Friday evening I was at Brighton Little for “The Pride”. I wouldn’t and couldn’t review this being a member of the Little. OH MY GIDDY GOODNESS I can’t even begin to tell you how absolutely brilliant it was. Superb script, beautifully and sensitively directed with perfect understanding of the material, and the acting was incredible. Sometimes BLT produce absolute class, and this was one of these moments. This is NOT a forgettable play, or a forgettable evening. This will stay with me. Wow. If I could have reviewed it I would have given 5 stars.

Saturday, this time without Mia, I saw “Ogg and Ugg and Dogg” about how early humans first connected with wolves and tamed them, thus creating one of our most beloved pets. Sounded great, and it started really well but after about 20 minutes just kind of fizzled out slowly through to the end. I really wished more for it as it had potential. I reviewed this and if you want to find it do search but I won’t put the link.

Sunday, the best at the last: my favourite has to be “This Noisy Isle” which was just brilliant. A fun non patronising children’s show which as a deeper message. More of these please! Mia absolutely loved it and so did Andy and I. Read my review here.

Roared with laughter at “Frankenstein the Pantomime” – 4 stars

And was absolutely stunned by “A Steady Rain” – 5 stars

I also saw another play which I thought was awful, the publicity was misleading yet I really do admire the director who I think did a decent job with the awful script and an actor who failed to connect with the material, at least at the performance I saw. This is of course perhaps controversial because there were two in the audience who it obviously resonated with as they were sobbing; however some were yawning and looking at their watches. What I wanted to write in the review but couldn’t was that it was all terribly up it’s own arse.

Then there was “Hysteria” at New Venture Theatre (NVT) which was an interesting script of absolute darkness and details of child abuse juxtaposed with farce. It wasn’t my favourite script as I don’t think you can mix those two successfully in theatre, but if anyone was going to make the show a poignant and enjoyable event it was director Bob Ryder and lead actor Dan Dryer. And yes, they are friends of mine and I feel honoured that they are, but this is my honest opinion of the calibre of their skills: if I did not believe what I’m writing I simply wouldn’t write anything.

NVT always provides a quality detailed set, lighting and sound and it’s always a pleasure to go there. The direction and all the actors were superb. Huge well done to everyone involved.

I also went to see “Damien” the week before – a one man show about the true story of the minister of Molokai the Leper Colony, which might sound like a dire thing to watch but it was the most extraordinary theatre, an emotional roller coaster including humour and heartbreak. Absolutely superbly acted by Daniel Finley and directed by Janette Eddisford. Clearly I could not review this show officially as I trained at ACT (Academy of Creative Training) with those two incredibly talented awe inspiring people! But Fringe Review and Fringe Guru agree with me: 5 stars, ‘Must See Show’. I urge you if you have time, catch this if you can.

This coming week is a little less full of theatre due to other commitments and half term… but how we love Brighton Fringe, oh yes, how we love it.

This week was an interesting mix of Theatre.

Wednesday “The Death of Ivan Ilyich at the Rialto in Brighton. A profoundly moving piece of Theatre experienced on so many levels. There is a surprising amount of humour as well as a brilliant look at the taboo of talking about death and trying to carry on as ‘normal’. Why you need to watch this: Kevin Cherry’s amazing performance in the title role, as audience members you feel his pain, and the picture of his reaction when he sees himself in the mirror is poignantly haunting.

Friday “9 to 5 – the Musical” at the Barn Theatre. If you love the movie then without a doubt you would enjoy this. The audience were whooping and cheering at the end. Not the slickest production in the world and some issues with timing, tech and some numbers seeming under-rehearsed – but, the professional performance of Lea Spells as Doralee, the part played by Dolly in the 1980 film, raises the quality of the whole show. Shoreham Herald review says “she is as punchy and strong as the energetic star”.

Saturday “Damien” at the Lantern Theatre in Brighton. I was literally speechless after watching this emotional and beautiful performance by Daniel Finley of a remarkable true story. Absolutely well deserved 5 star reviews. I can’t recommend this highly enough, and Fringe Review “Must See Show” this year, calling it a masterclass in making quality Fringe Theatre. I could not agree more.