The Fringe vibe in this amazing city is vibrant, quirky, wonderful – and above all: weird. Deliciously so.

Turning the corner on the way to review a show there were an a cappella group of young attractive men singing and flyering (not busking) – by the time I got my phone to capture it, they had stopped “the bare necessities” and moved on to a funky version of “swing low, sweet chariot” until a corporate woman came and told them to shut up because they were disturbing office workers. I’ve worked in offices. Anyone who doesn’t respond to this kind of vibrant fun (and they were good!) needs a serious injection of needing to ‘get a life’.

I walked around today and found the Bristo Underbelly – which sounds a little like a medical condition, admittedly, but reminded me a little of the Warren during the Brighton Fringe. A little enclave, flanked by food stalls and bars, artificial grass on the ground, and communal seating where everyone huddles together (I had hoped for conversations with random strangers again but was disappointed, seems everyone was avoiding that). 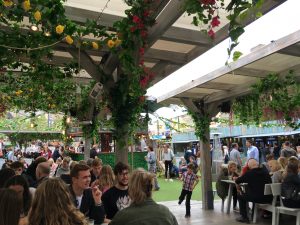 Amid the University buildings. Plus of course access to lots of Fringe venues. They seem to make venues out of everything.

So I’m sitting there eating, having seen two shows, when a group of people dance up all wearing headphones and singing along with the song that they were all listening to: Uptown Funk. This was such a spontaneous show of happiness it was simply wonderful. “Silent Adventures” apparently. 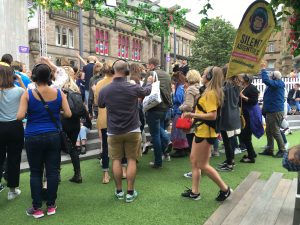 On to show number 3 of the day in a fabulous little site which was a little like a tardis. From the outside, you had no idea that there was so much inside. Including a bar with the strongest coffee the world has ever known. I might be buzzing all night. I was only one of 2 people in the audience for that one which was a little sad given how much they were both putting into this two hander – but with so many shows competing for audiences, it’s understandable.

Onto the fabulousness of Antling. OK, so I am obviously sound and lighting tech for the inimitable Helen Pepper Smith but I do still get to watch the show so it still counts. We had a reviewer in, who bought us a drink after the show as a thank you for his (and his friend’s) free tickets! How super is that? He said he loved it. Hoping the review is indeed as lovely as him and his friend were.

So we then checked to see if there was something we could see to unwind with – Mike Bartlett’s “Contractions”. Mike Bartlett is fast becoming one of my favourite playwrights so I thought ‘yes please’ – Helen has seen a previous version and was all in favour. So we went… and it was truly one of the most bizarre experiences… We were handed little radio packets with an earpiece and then given instructions on how to fit it and how to turn it on by a very strong accented woman. The man handing them out was saying “translation” in an equally strong accent. Helen and I just stared at him and the woman and then it suddenly dawned on me – a Russian company… so we watched this bizarre Kafka-esque two hander performed completely in Russian while a quiet female voice with yet again a strong accent translated what was going on in our ears.

At one point I leaned to Helen and asked her if this was really happening or if I was dreaming. She said it was real and pinched me. 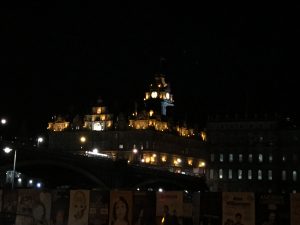 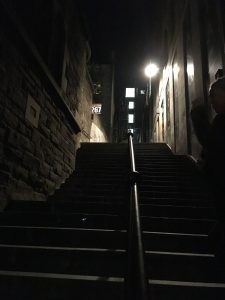 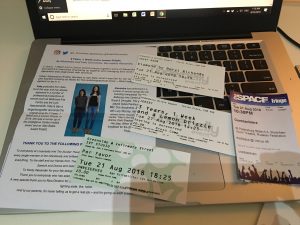